About the Branson Veterans Memorial Museum 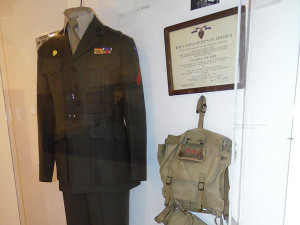 The vision of a rural Nebraska man, Fred Hoppe, has created what the Veterans Task Force calls one of the “greatest tributes ever completed to honor our country’s veterans!”

Fred Hoppe was inspired by the stories and sacrifices he heard about from his father (Fred Sr.) and the men that fought alongside his father during some of World War II’s bloodiest battles. Fred Hoppe Sr., is honored with a mural and a special exhibit in the museum depicting his heroic rescue of a wounded fellow soldier. .

Along with designing, funding, and building the Veterans Memorial Museum in Branson, Missouri, Fred Hoppe also collected and then wrote the scripts for over 2000 rare military artifacts he donated for use to the museum. After spending four years trying to raise money for a memorial to honor the veterans of the 20th Century and with over 36 foundations turning him down, Fred says, “It became apparent that I would have to take things into my own hands. The experts kept telling me that it would take six years to complete a project of this magnitude, however with our veterans dying at a rate of over one thousand per day, I was driven to finish this project quickly.” 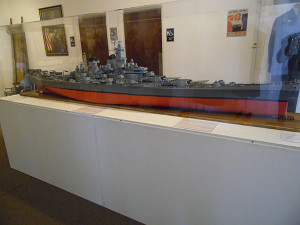 Fred Hoppe Sr Display Fred worked 18-hour days, seven days a week, living up to his pledge to complete the project in just 10 months. The museum officially opened on November 11, 2000.

Designing and participating in the construction of the building, Hoppe even cut up 70 tons of logs in a homemade sawmill in his backyard to provide siding and lumber for the museum’s 18,000 square feet building. “Along with saving money, this allowed me to personally make sure that every aspect of the building reflected the quality our veterans deserve,” said Hoppe. 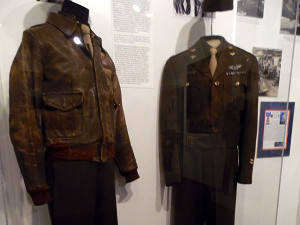 After researching and interviewing veterans for over 25 years, Hoppe personally wrote the scripts for each of the displays. Arranging with combat artist James Dietz, Mike Hagel, and others to create dozens of combat murals, Hoppe has painstakingly detailed the history of our nations valiant fight for our liberties during the 20th Century.

The exhibits in the museum cover WWI, WWII, Korea, Vietnam, the Persian Gulf, and all other recent conflicts during the 20th Century. The center great hall of the museum contains the 50-statue sculpture and the wall surrounding it list over 400,000 names of the men and women killed in action during WWII. Throughout the museum the walls of each great hall contain the names of those killed in action during Korea, Vietnam, Desert Storm, and other conflicts of the 20th Century. 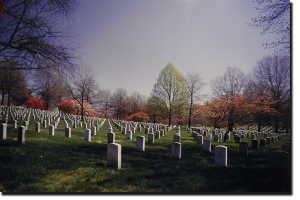 Hoppe states, “Along with the Veterans Memorial Museum being an artistic memorial to our veterans, we want to evoke from our visitors an emotional response to the far reaching implications of war and the undeniable courage of those who stood strong in the face of the enemy. Above all, this memorial is a gesture of thanks to all who died to defend these freedoms we enjoy today.” 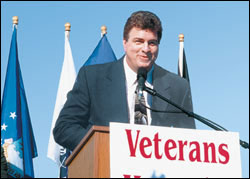 Fred Hoppe has been involved in the museum exhibit and sculpting field for over 40 years, winning over 100 state, national, and international awards. His recent specialization includes wildlife and monumental bronze sculpture. Research and field studies have taken him to Europe, Africa, and most of North America’s wilderness areas, including Canada’s Yukon and Northwest Territories. Eight of his 40 trips to Alaska have been above the Arctic Circle.

Fred’s work is nationally known, and includes commissions for Former President George Bush (Fred was selected from a field of over 400 artists to do this commission), General Norman Schwarzkopf, Former Vice-President Dan Quayle, the President of India, Nebraska Governor Ben Nelson, and other national and international figures.

To honor Nebraska’s 4 National Football Championships, Fred created the bronze sculpture that sits on the campus of the University of Lincoln, “Husker Legacy”. This is a life-size sculpture of seven football players and is placed outside Memorial Stadium. In 2006 Fred was commissioned to create the statue of Tom Osborne and Brook Berringer for the University of Nebraska. Other remarkable pieces include “Archie” the giant bronze mammoth in front of the University of Nebraska State Museum – Morrill Hall (This life-size replica of a giant imperial mammoth that roamed the plains of Nebraska 23,000 years ago is 26 feet long and stands on its base at 17 feet high), the life-size sculptures for the Andrew Jackson Higgins Boats National Memorial for the City of Columbus in Nebraska, and a life-size sculpture of Father Flanagan for the City of Ballymoe in Ireland. Over 300 of Fred’s bronzes have been donated to non-profit organizations, such as Eppley Cancer Center, the Make-A-Wish Foundation, Nebraska schools, and others, raising over $ 500,000.

The Veterans Memorial Museum was envisioned, financed, created, and implemented by Fred and opened in October of 2000 with the official grand opening on November 11, 2000. This national tribute is his vision to honor the legacy of our veterans of the 20th Century. Fred has been interviewing and researching veterans for over 25 years and collected over 2000 exhibits and artifacts for the museum. He personally wrote the scripts for each display and also created other bronze sculptures and commissioned murals to adorn the museum which consists of over 18,000 square feet of exhibits and artifacts.

Fred was born and raised in Nebraska. He attended Nebraska Western and the University of Nebraska. Fred is married to Donna and they have three sons. Along with creating special bronze sculpture commissions for others, Fred is creating additional sculptures for the Veterans Memorial Museum in Branson, Missouri; as well as directing the operations of the museum; and procuring additional exhibits for the Veterans Memorial Museum.